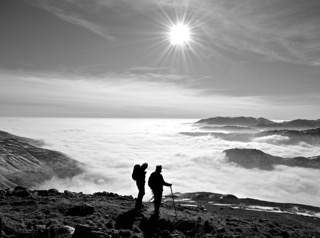 I took this shot a few months back on Heathers walk up Seat Sandal. It was a great day with the best cloud inversion for a long time, which was also enjoyed by the A party on Crinkle Crags. It shows Roger and the unmistakable figure of Bernard apparently having a natter whilst taking in the amazing view.
Although I shot it in colour, I entered the shot in a competition in black and white at Photography Of Cumbria. To my surprise I won the comp with this shot. Apparently it goes forward to December where it is judged with 11 others to get the Photograph of the year.
As it was taken on a club walk I thought it may be of interest to some members and also to say thanks again to Heather for the walk and the two handsome subjects who were not aware of their inclusion in the shot. They are not entitled to any royalties by the way.
Cheers
Pete

Due to the latest government statement regarding the Coronavirus

there will be no club walks for the foreseeable future

I hope everyone stays fit and healthy and I'll look forward to seeing you all again when the situation returns to some sort of normality.

get in touch. There are several members willing to help if necessary